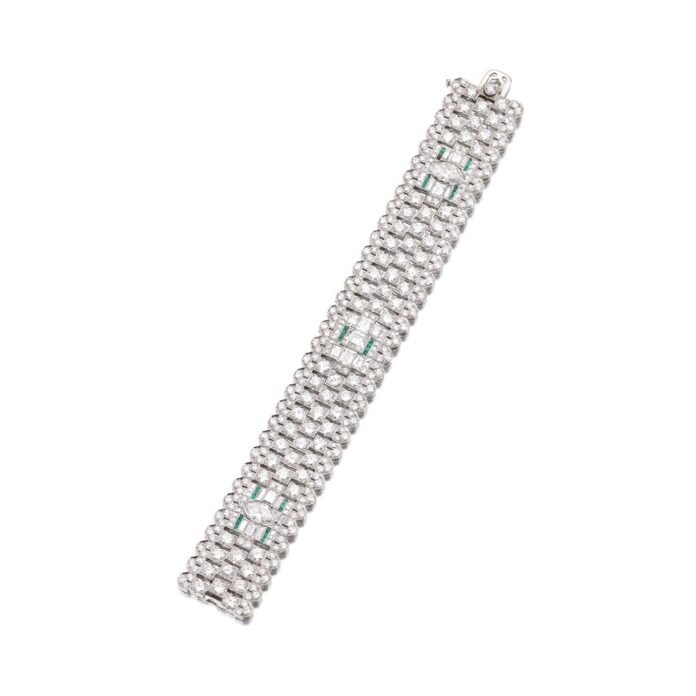 DUBAI: Late Egyptian actress Hind Rostom was known to trawl jewelry boutiques around the world, in search of diamonds and rubies. An avid jewelry collector, the icon was also a regular at auctions, where she sought out some of her favorite gemstones.

Now, collectors and jewelry aficionados will get the chance to uncover treasures from Rostom with a selection of jewelry from her personal collection being offered by her family for the first time.

An emerald and diamond bracelet worth $27,000. Supplied

Sotheby’s Magnificent & Noble Jewels auction in Geneva on Nov. 10 will be auctioning eight lots, including a diamond and emerald bracelet estimated to fetch nearly $27,000 and a pair of diamond cluster earrings worth $7000 by David Webb, which will be exhibited at Sotheby’s Dubai ahead of the Geneva auction.

The beauty icon, who is known as the Arab world’s Marilyn Monroe, is often referred to as “the first lady of Egyptian cinema.” The screen siren was born Nariman Hussein Murad in Alexandria. She started her career at the age of 16 with the film “Azhaar wa Ashwak,” however, it wasn’t until her role in the 1955 film “Banat el Lail,” that her career truly kicked off. She would go on to star in more than 80 films, including Youssef Chahine’s internationally-acclaimed “Cairo Station” as an unlicensed soft drinks vendor at a railway hub.

Rostom retired in 1979 — at the peak of her highly-successful career. Her reasoning? She was determined to be remembered at her best. So determined that no amount of money or single project was able to coax her out of retirement. In 2002, she even turned down an offer of more than 1 million Egyptian pounds to dramatize her life, famously stating: “My life is not for sale.”