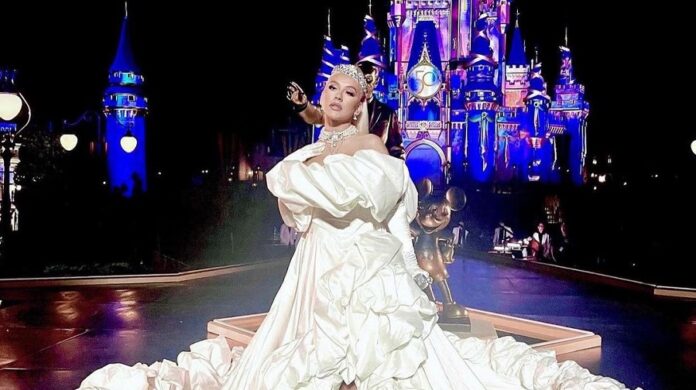 DUBAI: Christina Aguilera had a real-life princess moment this week as she helped celebrate the 50th anniversary of the Walt Disney World Resort in Florida this week. The US singer took to the stage in front of the theme park’s iconic castle to perform some of Disney’s biggest hits such as “When You Wish Upon A Star” from “Pinocchio” and “Brave and True” from “Mulan” for the ABC spectacular, “The Most Magical Story on Earth: 50 Years of Walt Disney World” wearing a white, fairytale gown worthy of a Disney princess. The dramatic, frothy haute couture confection was from Bahraini label Monsoori, founded by designer Shaima Al-Mansoori.

The “Genie in a Bottle” hitmaker accessorized the head-turning look with a pearl choker necklace from Vivienne Westwood, bejeweled opera gloves and pointed-toe pumps. Naturally, her princess-worthy look would not have been complete without a glittering tiara, which she wore over a sleek ponytail.

The New York native’s relationship with Disney goes way back, so it makes sense that she was brought out to help ring in the beloved company’s 50th anniversary.

In fact, the “The Voice” coach began her career on The Mickey Mouse Club television show when she was 13-years-old, alongside Britney Spears, Justin Timberlake and Ryan Gosling.

Meanwhile, Monsoori is known for its flouncy, tulle red carpet gowns, which have been worn by everyone from Jhene Aiko and Beyonce to Katy Perry and Bebe Rexha.

Monsoori wasn’t the only Arab-helmed label to turn heads at the Disney event.

US singer and actress Halle Bailey performed a stunning rendition of “Can You Feel the Love Tonight,” originally sung by Elton John for 1994 film “The Lion King,” in another Arab creation.

The star of the upcoming live action remake of “The Little Mermaid” wore a strapless gown from Lebanese label Elie Saab for the occasion.

The black ball gown was plucked from the Beirut-born designer’s Spring 2021 Couture collection and featured a sweetheart neckline and plenty of sequins. She paired the dramatic dress with diamond jewelry from Nadine Aysoy.