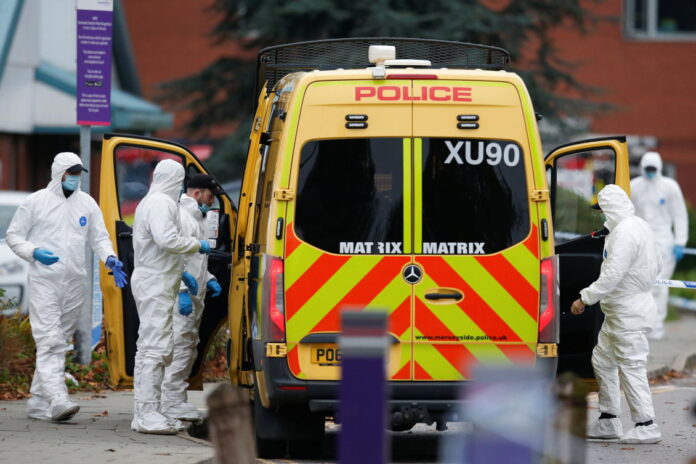 LIVERPOOL: Britain raised its terrorism threat level on Monday after a deadly explosion outside a hospital in Liverpool in an attack involving a homemade bomb that was reportedly foiled by a quick-thinking taxi driver.
Interior minister Priti Patel said intelligence officials had increased the threat from “substantial” to “severe” — the second-highest level meaning an attack is highly likely.
Patel said the decision was made because Sunday’s blast, which destroyed a taxi and killed a passenger outside the Liverpool Women’s Hospital, was the second incident in a month.
Last month, veteran British MP David Amess was stabbed to death as he met constituents in southeast England, in an attack that prosecutors said had a “terrorist connection.”
Prime Minister Boris Johnson said the Liverpool attack was a “stark reminder of the need for us all to remain utterly vigilant.”
“But what yesterday showed us all is that the British people will never be cowed by terrorism. We will never give in to those who seek to divide us with senseless acts,” he added.
Russ Jackson, in charge of counter-terrorism policing in northwest England, said the motive for the Liverpool attack was unclear.
But he told reporters that the improvised explosive device, which ignited in the cab, turning it into a fireball, was “built by the passenger” who died. Jackson added that it was being treated as a “terrorist incident.”
The explosion came just minutes before a Remembrance Sunday service at nearby Liverpool Cathedral, prompting speculation the event was the intended target.
“We cannot at this time draw any connection with this but it is a line of inquiry, which we are pursuing,” said Jackson.
Three men aged 21, 26 and 29 were arrested under the Terrorism Act soon after the explosion in the nearby Kensington area of the city and were taken for questioning.
A fourth man, aged 20, was detained earlier on Monday, Jackson said, adding that “significant items” had been found at a second address in Sefton Park, near Kensington.
The blast and fireball sent thick smoke into the air just seconds before Britain fell silent in tribute to its war dead and military veterans at 1100 GMT.
There was immediate praise for the taxi driver, who reportedly locked the passenger — a man — inside the cab after growing suspicious about his intentions.
The passenger had wanted to go to the annual service at Liverpool’s Anglican cathedral, according to UK media quoting investigators and friends of the cabbie.
But road closures forced the taxi to detour and they ended up at the nearby hospital, where the bomb went off just after the driver had escaped, the Daily Mail reported.
Johnson, who convened a government emergencies and contingencies meeting in response to the blast, said it appeared the driver “did behave with incredible presence of mind and bravery.”
Liverpool Mayor Joanne Anderson said: “The taxi driver, in his heroic efforts, has managed to divert what could have been an absolutely awful disaster at the hospital.
“We knew that the taxi driver had stood out and locked the doors, we knew that early on,” she told BBC radio.
Jackson gave few details but said the taxi driver picked up the passenger from the Kensington area.
“As the taxi approached the drop-off point at the hospital, an explosion occurred from within the car. This quickly engulfed it in flames,” he added.
“Remarkably, the taxi driver escaped from the cab. He’s been treated for his injuries that he sustained and he’s now been released from hospital.”
Some 2,000 people attended the religious service of remembrance, one of the biggest outside London, and a military parade, according to the Liverpool Echo newspaper.
Senior Conservative politician Oliver Dowden said the driver’s actions contrasted with “the cowardice of terrorist attacks.”
“Clearly we’ll have to see exactly what happened there,” the ruling party’s co-chairman told Sky News, stressing reports of the driver’s response had to be confirmed.
“But if that is the case, that’s another example of true bravery and courage,” Dowden said.
The scene at the hospital remained cordoned off on Monday, as did the streets around the two properties under investigation, where forensics officers in white suits were seen.
Britain had downgraded its terrorism threat level from “severe” to “substantial” in February. It had been raised last November after a deadly shooting rampage in Vienna and several attacks in France. All were blamed on Islamist extremists.