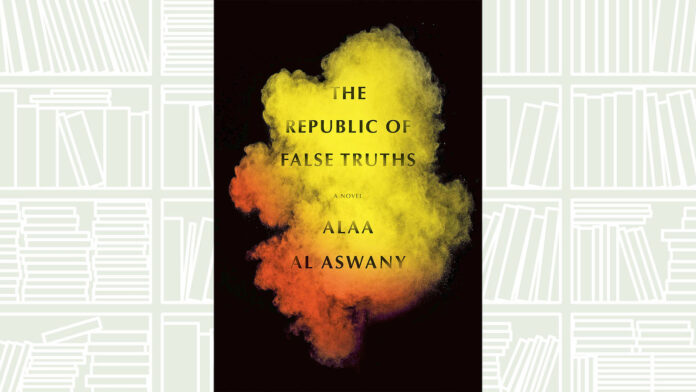 CHICAGO: The 2011 revolution has just begun in Egypt. Readers may know how this story ends, but have yet to discover the complicated lives and details of Alaa Al-Aswany’s band of characters in “The Republic of False Truths.” Internationally acclaimed and award-winning author Al-Aswany takes readers into the heart of Cairo at the beginning of the Arab Spring. Originally published in 2018 and translated from Arabic into English by S.R. Fellowes in 2021, this is an intimate journey into the people’s revolution that amplified voices from every political and social corner of Egypt.

The story features Gen. Ahmad Alwany, a 48-year-old pious Muslim whose duty is to secure the republic and its citizens, and who believes that the “Egyptian people is like a child: If you leave it to decide for itself, it will do itself harm;” Ashraf Wissa, an out-of-work actor who is a cynic at heart until he is thrust into the revolution; Asmaa Zanaty, who is fiercely independent and married to the principles instilled in her through her grandfather and her education, and who must fight zealots for the love of her country, help lift the new-found voices of the youth and struggles to loosen Egypt’s grip from the upper echelons of corrupt society; and Danya, a medical student whose aristocratic background creates a film over her eyes until the revolution hits the medical department at her university. The revolution brings people together and pulls others apart. It helps bloom a new love for one another and for country, but also strengthens hatred in others, further solidifying the division between those who want change and those who do not.

Complex lives fill “The Republic of False Truths,” where words are twisted and ideas about life are molded around people’s personal experiences. The republic is where wealth attracts wealth and power attracts power, but also where a willingness to change grips those who seek it. Ideas flow as steadily as the people on the streets when they realize that Egypt can emerge from the grips of dictatorial power. This story is about weighing odds, balancing passions and prioritizing a newer, brighter future.

Among the generational and social differences, Al-Aswany’s characters — a general, a sheikh, a television personality, a young engineer, and others — must decide what is right for themselves, uniting in selflessness to protect their country. And while there is devastation, loss and terrible violence against the youth and women, Al-Aswany’s characters commit themselves to their truths. What ensues is an intricate tale of love and opposition that brings readers together to witness miracles and disasters, as well as the courage that takes hold when opportunity arises.