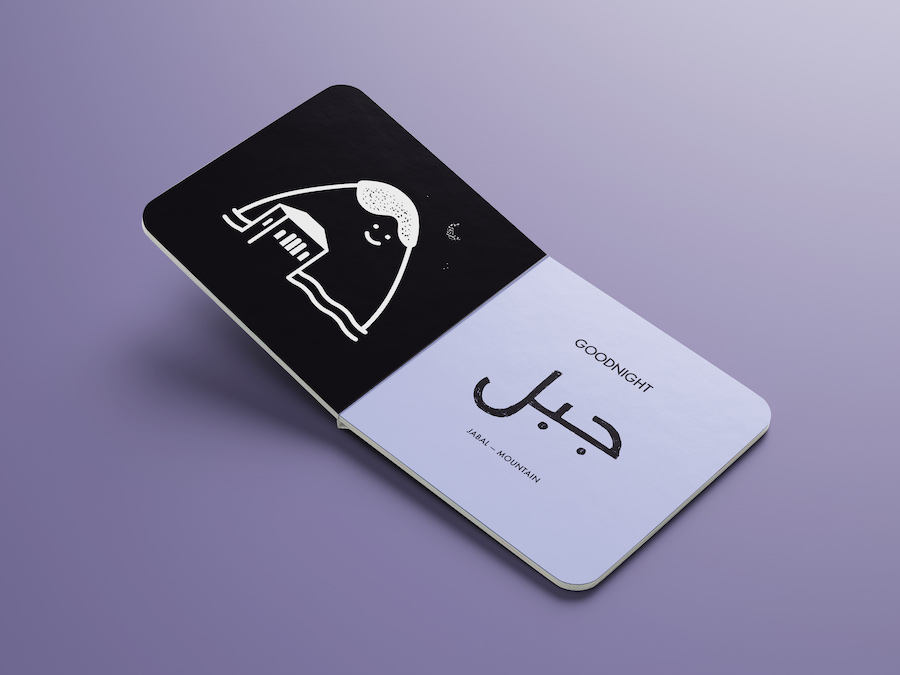 DUBAI: Inspired by the birth of her newborn son, Lebanese illustrator and graphic designer Celia Jaber has published a new bedtime board book for parents struggling to find high contrast reads for newborns in Arabic.

“Goodnight Habibi” (my love, in Arabic) is bilingual and high contrast — making it stimulating enough for newborns whose perception of color develops over their first five months. Because high contrast images are easier for babies to interpret, it is widely advised that parents opt for simple, high contrast books for the youngest bookworms in the house. Surprisingly, such books are difficult enough to find in English in the Gulf market, but now parents have another choice to add to their bookshelves.

It tells the story of a baby being gentle and kind by saying goodnight to its surroundings in a Lebanese village – from the moon to the mountain and the family. At the heart of it, the picture book represents a sentimental offering from mother to child.

“I created this book for Rami (Jaber’s son), but also for his generation,” San Francisco-based Jaber told Arab News. “My husband is not Arab and both our native languages in the house will be Arabic and English.

“I would love for Rami to grow up in the US but also have the Arabic language as an interest to him. I really do care about representation – having an actual book that meets my standards of modern parenting and also be beautiful, so I created that as a present for him and others.”

Raised in Beirut and educated in Milan, Jaber belongs to a small but creative community of young entrepreneurs and artists, who are thoughtfully elevating the quality and content – from outdated to engaging – of Arabic children’s books.

“There is still a huge gap and there’s a lot that we, each designer and publisher, can also bring in as an experience that’s a little bit personalized or different from each other,” she said.

“I’ve been inspired to start a book that meets my baby at the moment that he was born. Newborns cannot see colors, everything around them is very blurry and they only see in high contrast. This would actually attract their attention and that’s a way for them to connect to the world,” Jaber added.

Linguistically, the chosen words are informal, short, and sweet – written in Arabic and transliterated into English for non-Arabic speakers.

“It’s a book primarily for Arabs, English bilingual readers. I would love for it to expand beyond that just to share a bit of our culture,” she said.