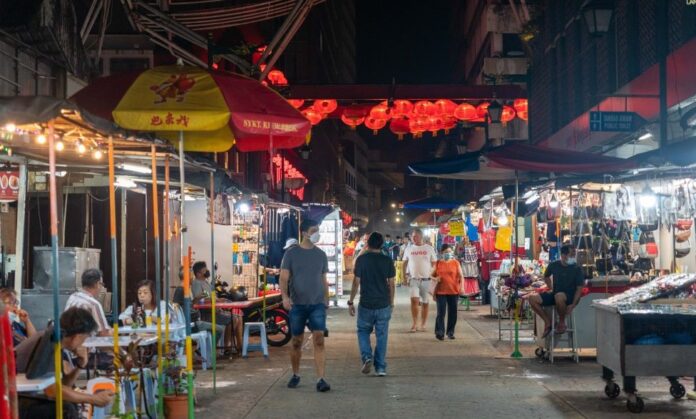 KUALA LUMPUR: Every morning in the heart of Kuala Lumpur’s Chinatown, Ng Lee Yam begins the day by grinding soaked soybeans into the beverage that has gained him an almost cult following.

Kim Soya Bean, serving soymilk in Petaling Street, is on all foodie lists of must-visit spots in the Malaysian capital.

Behind the drink’s fame and taste is a labor of love and a special recipe Ng’s family developed over generations.

“We put a lot of heart and effort into making this soybean drink. We use traditional methods,” he told Arab News. “This soy drink stall has been around in Petaling Street for 80 to 90 years.”

Ng is aware of his fame, and newspaper clippings with photos and reviews of his stall decorate its display.

“Nowadays, people find us from YouTube, including overseas tourists, Americans, Canadians and more. They searched for us, Kim Soya. They showed me their phones and said to me ‘You are famous!'”

While Ng’s fame is undisputed, he is not the only celebrity vendor of Petaling Street, one of the most famous landmarks of Malaysia’s capital and the center of its original Chinatown.

Built by Cantonese and Hakka mine workers who migrated to the Malay Peninsula in the 19th century, Chinatown was one of the early settlements of Kuala Lumpur, and has long been an enclave of the Malaysian Chinese community — the second largest ethnic group in the country, after Malays.

Petaling Street begins behind a green arch decorated with wooden ornaments and Chinese motifs. The gateway is an entry into a bustling street market, where rows of red hanging lanterns are suspended across the way, and old architecture meets modern designer interiors, colorful murals and myriad stalls selling all kinds of goods and foods.

Like Ng, many of Petaling Street’s vendors have been around for decades. Lee Siok Han’s Hong Kee specializes in seafood and clay pot chicken.

“We have been in the business for more than 30 years, with three generations of family members selling food at the hawker stall,” Lee told Arab News.

People missed the flavor of her food when coronavirus lockdowns forced Hong Kee to close temporarily.

“A lot of tourists and locals come to eat at our stall,” Lee said, as her business, like many others in the neighborhood, is slowly regaining its pre-pandemic pace.

Han Yun, the owner of Mee Tarik, which specializes in handmade noodles and dumplings, said the business is “doing quite well.”

Every night, and especially during weekends, his restaurant is packed with guests looking for authentic Chinese treats.

“These are our traditional cuisines, originated from Lanzhou, China,” he said, while making a crispy Chinese scallion pancake. His guests are mainly locals, Muslim and non-Muslim, and he makes sure to cater to both by using halal ingredients.

Sister Lan, who runs a small juice stand with her husband, is more focused on foreigners. Her display with juicer machine, long stalks of sugarcane and a pile of coconuts is tucked between shops selling counterfeits of branded accessories — another famous sight in Petaling Street, where copies of all designer bags and watches can be found at a fraction of price of original goods.

Since Malaysia’s reopening two months ago, Lan’s juice sales have been back on track.

“There are a lot of tourists from many countries that come here to buy our drinks, including from India, Sri Lanka, the US and even China,” she said. “Tourists like natural fruits and they love to drink coconut drinks. They also like sugarcane drinks and are fascinated by the way we squeeze the juice.”

Tourists do indeed say they like the variety of flavors Malaysia’s cuisine has to offer, but there is more to it than that.

“The people are lovely, extremely friendly,” Rosalyn Sbeehy, who arrived in Kuala Lumpur from Ireland, told Arab News. “It is such a multicultural hotchpotch.”