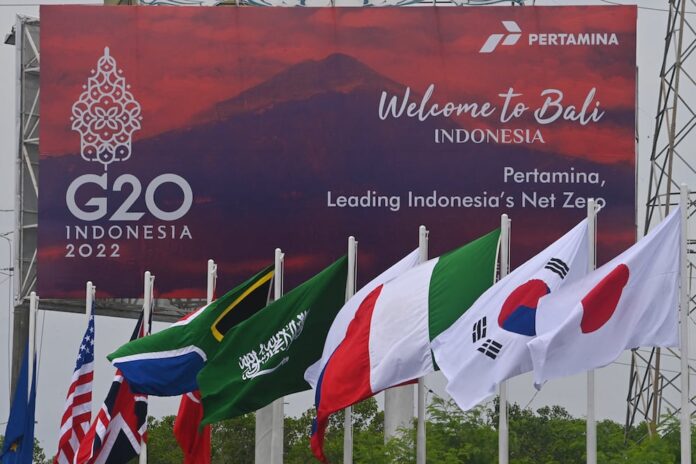 DUBAI / DENPASAR: World leaders meet in Indonesia this week to discuss key issues affecting the stability of the global market, with talks likely to be affected by tensions over the war in Ukraine and its economic fallout.

The Group of 20 summit is taking place in Nusa Dua on the island of Bali, on Nov. 15 and 16, marking the culmination of Indonesia’s presidency of the G20 biggest economies and more than 200 working group meetings and side events held throughout the year.

It was established in late 1999, in the wake of the Asian financial crisis. Initially focused on broad macroeconomic policy, it has later morphed into a forum to address urgent problems such as vaccine access, food security, and climate change.

Together, these 20 economies account for 80 percent of global economic output, nearly 75 percent of exports, and about 60 percent of the world’s population.

Every year, the leaders of G20 members meet to discuss economic and financial matters and coordinate policy on other issues of mutual interest.

The group’s annual summit is hosted and chaired by a different member, giving host countries an opportunity to push for action on issues that matter to them.

Indonesia’s President Joko Widodo has pushed for a meeting between Ukrainian leader Volodymyr Zelensky and his Russian counterpart Vladimir Putin, who says he has no plans to attend the summit. (AFP)

But just three months into its chairing of the group, in February, Russia’s invasion of Ukraine added new variables to the equation, bringing to the center of discussions food and energy security — two issues that have become global concerns as a result of the ongoing war.

High fuel and food prices are often correlated with mass protests, political violence, and unrest. While Sri Lanka and Peru have already begun to see riots, Turkiye, Pakistan, and Egypt are also at risk for social unrest as the cost of living accelerates.

These problems are expected to dominate G20 summit talks.

Teuku Rezasyah, international relations lecturer from Padjadjaran University in Bandung, told Arab News: “Most of us have learned what happened in the 1997 Asian financial crisis and the global economic crisis in 2008, and that was the reason behind the foundation of the G20.

“They will talk about energy security, food security, and then they will also talk about how to maintain global economic stability and development.”

Inflation running at levels not seen in decades, an unfolding debt crisis, and cost-of-living problems are the biggest threats to doing business for G20 countries in the next two years, according to an early November survey by the World Economic Forum.

The global economic recession caused by the coronavirus pandemic has been further aggravated by the ongoing war in Europe.

While the G20 is an economic forum and not one for addressing armed and political conflict, the situation in Ukraine is expected to permeate discussions.

Saidiman Ahmad, program manager at the Jakarta-based pollster Saiful Mujani Research and Consulting, told Arab News: “This war has become the source of energy and agricultural crises. It would be strange if a matter as major as this did not become one of the main issues on the G20 forum agenda.”

The grain deal between Russia and Ukraine establishing safe corridors along which Ukrainian ships can come in and out of three designated Black Sea ports in and around Odessa creates a traffic jam in Istanbul. (AFP)

Since Russia’s invasion of Ukraine and Western sanctions slapped on Moscow, the fuel price spike has been the second highest since the 1970s. The conflict has also disrupted supplies of wheat and fertilizers — the two countries account for one-third of the global wheat, while Russia is also a top exporter of nitrates used in agriculture.

While sustained food shortages and high food prices could send millions of people around the world into acute food insecurity, and the UN has already been warning about looming famines, G20 finance and agriculture ministers committed during an October meeting to addressing global food insecurity. It is not clear, however, if the matter will be reflected in the leaders’ final declaration.

Attempts to address the power crisis, on the other hand, should be expected to appear in the summit’s communique.

The Indonesian Ministry of Energy and Mineral Resources announced last week that G20 members had agreed to accelerate energy transition — a shift from fossil fuels to renewable sources — and include efforts for energy security in the summit’s final declaration.

The presidents of the world’s two biggest economies are set to meet in Bali on Monday, in what will be their first face-to-face chat since Biden took office, and as tensions between America and China are high — over trade policies, technology, and Beijing’s increasing military activity in the South China Sea and actions on Taiwan.

China has also avoided direct condemnation of Russia for the invasion of Ukraine, while the US has been the main initiator of sanctions on Moscow.

Besides G20 leaders, dozens of other top-level officials are also expected to attend, and the Indonesian military announced in its summit security updates that it had prepared VVIP task forces for an additional 42 heads of state arriving in Bali to attend the forum.

Indonesia was trying to arrange a meeting between Vladimir Putin, the president of Russia — one of the G20’s key members — and his Ukrainian counterpart Volodymyr Zelensky, who has been invited to the summit as a guest.

While the Russian embassy in Jakarta has already said that Putin would not come to the summit, Zelensky’s press secretary told the Ukrainian news media he would attend, but most likely virtually.

In late June, Widodo was the first Asian leader to travel to Kyiv and Moscow to meet his Ukrainian and Russian counterparts in an effort to ease the conflict’s impact on the international community.

There is a strong belief among Indonesians that the Southeast Asian country as the G20 host can help defuse the war.

A survey conducted by Saiful Mujani Research and Consulting in August showed that 84 percent of Indonesian respondents familiar with the G20 forum agreed that their country — which has been trying to remain neutral — could play a role in conflict resolution.

US President Joe Biden meets with Indonesia President Joko Widodo (not pictured) on the sidelines of the G20 Summit in Nusa Dua on the Indonesian resort island of Bali on November 14, 2022. (AFP)

The hopes, however, may be inadequately placed.

Dr. Luthfi Assyaukanie, international relations lecturer at Paramadina University in Jakarta, told Arab News: “The main objective of the G20 meeting is economical, not political. That’s one thing that we have to highlight.

“If this forum is projected to reconcile Russia and Ukraine, then we’d put a lot of burden on this forum, because the forum is not designed to do such a thing. Even the United Nations or the European Union cannot handle this problem, so I don’t think we should expect too much from this forum in terms of Russia-Ukraine reconciliation.”

What about a final communique?

The war is likely to affect the summit leaders’ final declaration. Indications of it were already seen in July, when a meeting of G20 ministers failed to produce a consensus on the reasons of the current crisis.

While Western states blamed it on Russia’s invasion, Moscow in turn said the problems were caused by the sweeping sanctions against it and a European blockade on the transport of some Russian goods through EU borders.

“In the communique, you have to explain why there is food insecurity currently in the world. They could not reach an agreement on what caused the food crisis and inflation,” Assyaukanie said, adding that the same hurdles would now appear at the summit.

“The ultimate goal of the G20 forum is to formulate a communique. I am concerned that the G20 summit will not, and if that happens, people may consider this forum a failure.”