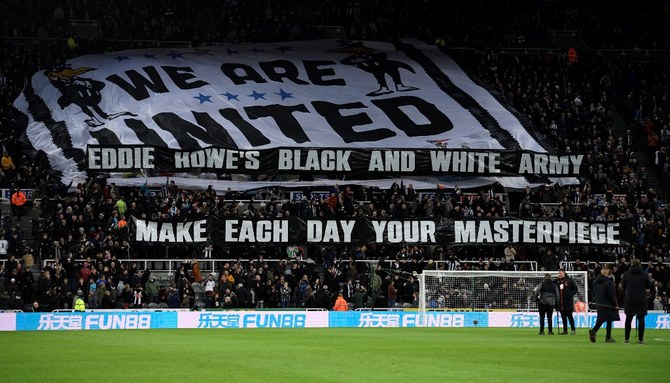 NEWCASTLE: Excitement for the new Premier League season is increasing on Tyneside.
As is the to-do list for Newcastle United’s owners.
Less than two weeks away from the return of the first-team squad to the club’s current ‘under-development’ training facility in Benton, North Tyneside, next season’s top flight fixtures have been released.
Newly-promoted Nottingham Forest, back in the top division for the first time in more than two decades, are first up at St. James’ Park, while a tough first month also sees Manchester City visit Newcastle, as well as a trip to Anfield to face Liverpool.
Head coach Eddie Howe is keen to hit the ground running in the coming season, in stark contrast to the debacle overseen by Steve Bruce at the start of the last one.
Pre-takeover, and in the first few weeks after the Public Investment Fund of Saudi Arabia swept through the doors, Newcastle failed to win any of their opening 14 games of the 2021/22 season — the worst start of any team in Premier League history to have subsequently avoided relegation.
And Howe is keen to avoid any such issues this time out as he looks to build a squad capable of flirting with, if perhaps not yet reaching, the Premier League’s European places.
But what is required this summer to even get close to that? Here, we take a look at what Howe, co-owner Amanda Staveley and newly-appointed sporting director Dan Ashworth need to prioritize before the new season kicks off.

An injection of goals needed
One thing Newcastle United seriously lacked last season was goals. Only the bottom six plus Brighton and Wolves scored less in the 38-game campaign.
And one of the biggest headaches for Howe — and Bruce before him — last season was the fitness, or lack of it, of center forward Callum Wilson.
At his fit-and-firing best the big number nine is a match for any English striker in the division, with the exception of Harry Kane. But his injury record is cause for concern. Wilson missed four months of last season and more than two months the season before, but still managed to finish both seasons as the club’s top goalscorer.
Sadly, there is no reason to think that Wilson’s injury record will significantly improve next season, but this summer United have the power to arm themselves for when the inevitable injury absence crops up.
While Chris Wood gave his all as a stand in from January onwards, he is a limited striker and United must look to upgrade.

Clear out the dead wood
This may be Ashworth, Howe and Staveley’s most difficult mountain to climb this summer.
In order for United to add quality to their 25-man Premier League squad they must trim some fat, and that’s without even starting to look at those players who sit outside the main group.
The likes of Dwight Gayle, Federico Fernandez and Javier Manquillo are players likely to prove surplus to requirements this summer — but all three have years left on their deals and are sitting pretty on significant wages.
Gayle was a saleable asset when Newcastle first looked to move him on under previous owner Mike Ashley. But with Ashley unwilling to accept offers in the region of $18million from the likes of Fulham and West Bromwich Albion for the player — and manager Rafa Benitez failing to trust Ashley would allow him that money to find a replacement — Gayle became United’s great survivor.
Three or four years later, with little to no playing time under his belt, and even less goals, United are going to find it tough to find takers for a player who is on an inflated Premier League wage but looks most comfortable operating at Championship level.
Fernandez and Manquillo were both handed new deals under Bruce, and are also on top flight wages. It may be that Newcastle have to agree to pay a percentage of their wages, just to get them off the books.
Outside of the 25, there are the likes of Freddie Woodman, Ciaran Clark, Jeff Hendrick, and others who could boost the coffers for a summer first-team revamp.

Go deep or stand still
Howe’s biggest issue with his Newcastle squad is that he does not believe it has the depth enjoyed by, for example, Brighton, Wolverhampton Wanderers or Aston Villa — never mind the top six or seven clubs in the division.
There is a sense that an injection of confidence and team spirit carried the side through the back end of the last campaign, driving the club from a likely bottom-four finish to 11th place.
If United want to take that next step, they need to add depth, particularly in key positions.
For example, should goalkeeper Martin Dubravka get injured, Newcastle must be able to call on a better deputy than 31-year-old Karl Darlow, as good a servant as he has been to the club.
As mentioned, an understudy to Wilson is also a must, as is cover for another of United’s injury-prone stars, winger Allan Saint-Maximin. Some depth in the center of defense is also necessary.

Don’t accept the ‘Newcastle Tax’
This summer’s transfer window is as important as any in the club’s history, and it is paramount that they do not set a dangerous precedent. Overpay for players this summer and they will be overpaying for the next 10 years; smash the wage structure for a single player and they will have 10 more knocking on the door for a raise. The club’s phones will also be hot with agents from around the world looking for their cut of the action.
Newcastle’s custodians, led by Staveley and husband Mehrdad Ghodoussi, seem to have their heads firmly on their shoulders and want the club to build sustainably.
They do not want a quick fix of the kind that happened at Manchester City and Paris Saint-Germain, nor do they want to fall into the Financial Fair Play trap that Everton find themselves in at the moment.
It needs to be made clear this summer that Newcastle is not a cash cow ripe for milking. They must not be taken for a ride in the transfer market.

Resolve ticketing issues and shine a light on future plans
Newcastle United had more than 120,000 ticket requests for the first game after the Saudi-financed takeover, a home loss to Tottenham Hotspur back in October. There is clearly huge demand for tickets in the city and beyond.
Anyone who knows English football knows Newcastle United. Even though Newcastle is only a small city, home to less than 300,000 people, it has one of the largest and loyalist fan bases in the world.
Give them hope and they will come.
But the issue surrounding tickets needs to be resolved quickly. The Magpies have always, from the 1990s onwards, had a steady stream of more than 30,000 season ticket holders, which has maxed out — due to the need for away allocations, corporate seating, et cetera — at more than 40,000 as recently as during Benitez’s reign. The stadium itself only holds 52,000.
So here’s the issue: How do the 10,000 or so tickets sold on a matchday get divided up next season? Will they go on general sale on a game-by-game basis or will season ticket opportunities be opened up again? Keeping the fans happy on this divisive subject is going to be a tough issue to navigate. A clear long-term plan for stadium redevelopment needs to be outlined, as demand is already far outweighing supply — and that’s before the party has even started.

Delegation: The need for an improved football executive
Ashworth’s appointment as sporting director has taken some of the summer transfer burden off Howe. But United must go further. Staveley and Ghodoussi have been acting as co-chief executives at the club, with no one left to do the job. They allowed former managing director Lee Charnley to leave not long after completing the purchase of the club.
A new MD needs to found. And that needed to be done yesterday.
Running a football club is no easy business, and it is even harder when feet are light on the ground. An immediate beefing-up of the whole football operation is required and some delegation of tasks needed to free Staveley and Ghodoussi to do what they do best.

Continue to build on the foundations — the Ashworth effect
When Ashley departed, he left a near-clean slate behind him: A stadium ripe for improvement, a training ground in a similarly unloved state, a youth setup in need of direction; and a first team lacking any clear plan or purpose.
While some of those issues have already been addressed, others cannot be allowed to drift. And that’s where Ashworth — a pioneer of the Football Association’s ‘England DNA’ program — steps in.
Training ground developments must go much further than the material, there must be a structural framework implemented that squeezes the most from the football-mad region that Newcastle United is at the heart of.
Newcastle and its surrounding areas have produced some of the most revered talent in English football history. Two of the nation’s 1966 World Cup-winning starting XI were Geordies — the brothers Jack and Bobby Charlton — and generational talents including Alan Shearer, Paul Gascoigne and Peter Beardsley all hailed from the city and its surrounds.
The next Shearer, Beardsley or Gazza is out there, but this club, for too long, has been unable to unearth them. That has to change, especially if the future is to shine as brightly as PIF, PCP Capital Partners and RB Sports & Media want it to.