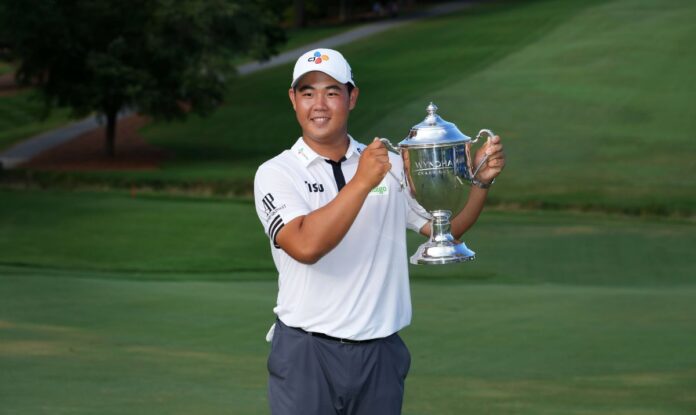 WASHINGTON: South Korean Kim Joo-hyung fired a stunning nine-under par 61 on Sunday to win the Wyndham Championship, his first US PGA Tour title, and secure his spot in the season-ending playoffs.Kim’s outstanding effort at Sedgefield Country Club, where the 20-year-old played the first nine holes of the final round in eight-under, capped a remarkable week that opened with his quadruple bogey eight at the first hole on Thursday.”It’s definitely a week I’ll remember forever,” Kim said after his 20-under total of 260 gave him a five-stroke victory over fellow South Korean Im Sung-jae and American John Huh.”I can’t believe it — I’m speechless right now,” Kim said, his emotions finally showing after a round in which he looked in supreme control.”I’ve worked really had to get to this point,” he said, his voice cracking. “Just walking off that 18th green, just thinking about the behind the scenes work.”It was a hard day. I didn’t know golf was this stressful,” added the player who goes by the nickname Tom in a nod to his childhood love of Thomas the Tank Engine.Kim roared through the front nine like a locomotive. His opening par was his lone four to go with seven threes and a birdie two.He hit seven of nine fairways and holed a total of 112 feet of putts in the first nine holes, rolling in a 20-footer at the second and a 24-footer at the par-three third.He rapped in a 12-foot birdie at the fourth, and gave himself a seven and a half-foot eagle at the par-five fifth.At the sixth, he rolled in an 18-footer — over his playing partner’s ball marker — then closed the front nine with a seven-foot birdie at the eighth and a 10-footer at nine.He was in real trouble for the first time at the par-four 10th, where he was in the deep right rough off the tee. His second shot left him short of the green and his third came up 50 feet short of the pin.He couldn’t convert, finally making a two-footer for his first bogey of the day.The birdies didn’t come so thick and fast on the back nine, where a testing downhill six-footer at the 12th missed left and a 21-foot birdie attempt at the tough 14th lipped out.Back to back birdies at par-five 15th and par-three 16th — where he landed his tee shot less than three feet from the pin — boosted his lead back to four strokes and again raised the tantalizing possibility of a sub-60 round.That failed to materialize as he closed with two pars to add a US title to his two precocious Asia Tour trophies.Given special temporary PGA Tour membership last month, Kim finished tied for third at the co-sanctioned Scottish Open then secured his US PGA Tour card for next year with a seventh-place finish in Detroit last week.Now he’s headed to the FedEx Cup playoffs, which start on Thursday with the St. Jude Championship in Memphis, Tennessee, his points total putting him in the top 35 in the standings that decide the 125 players eligible for the playoffs.It wasn’t something that seemed likely after his disastrous start to the tournament.”Yeah, I can’t believe I won with a quadruple bogey on the first hole,” he said with a laugh. “Hopefully that doesn’t happen again.”Kim had started the final round two shots behind leader Im Sung-jae after the weather-disrupted third round concluded on Sunday morning.Im carded a final-round 68 and Huh posted a 67 to share second on 265.