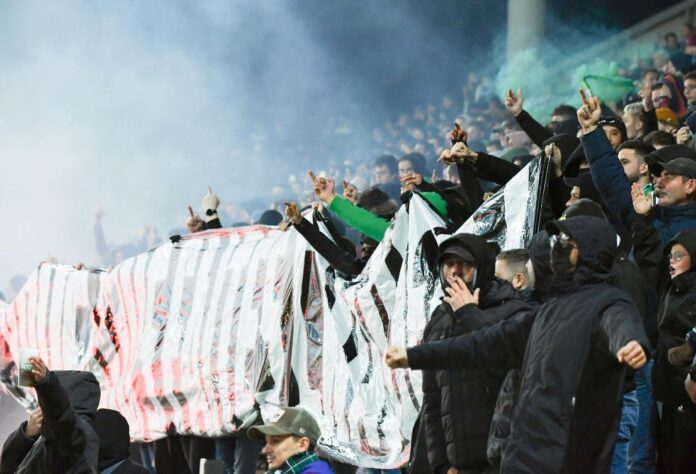 SAINT-ETIENNE, France: The kick off in the Ligue 1 match between Saint Etienne and visiting Angers was delayed for an hour by protests from home fans angry at their team’s dire form.
The latest in a series of incidents involving fans in and around Ligue 1 games this season started during the player warm up ahead of the scheduled 9pm (1900 GMT) kick off.
Fans unfurled banners, let off a barrage of rockets and smoke bombs and invaded the pitch, damaging the goals.
Fans unfurled banners attacking coach Claude Puel, club leadership and the players.
“We’ve had enough talk, you’re making us crack” said one visible through the smoke.
“Puel resign,” “management resign” and “we want a team worthy of its fans” chanted the fans.
The players left the field and kick off was put back as municipal workers repaired the nets at the city-owned Geoffroy-Guichard stadium.
Saint-Etienne are last in Ligue 1, winless after 11 matches.
On Thursday, fans hung a banner on the gates of the training center which said: “Puel, you have 24 hours to resign.”
The latest incidents come just two days after the league disciplinary committee imposed a two-match suspended closure of the stadium’s south stand after incidents during the derby against Lyon on October 3.
A season of angry fans in France opened with a match between Nice and Marseille abandoned on August 22.
That was followed by a string of incidents in September.
The northern derby between Lens and Lille was overshadowed by a pitch invasion that delayed the start of the second half.
The next weekend, supporters invaded the pitch at the game between Angers and Marseille, while stones were thrown at a bus taking Bordeaux fans to their match in Montpellier, with 16 suffering minor injuries.
Nice were deducted a point. Lens were ordered to play home matches behind closed doors.