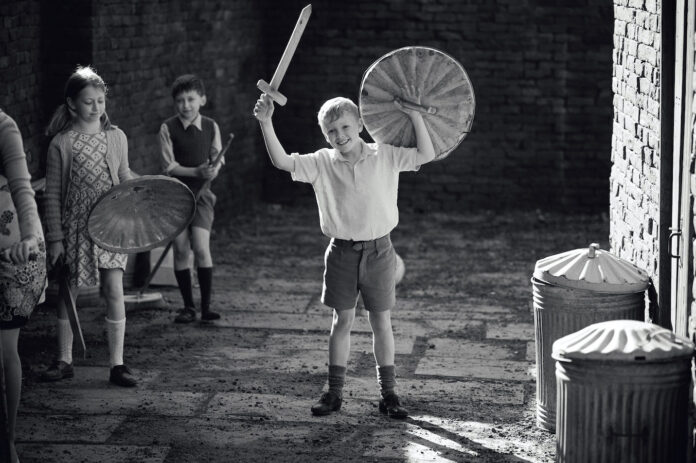 DUBAI: Tenured filmmaker Kenneth Branagh (“Hamlet,” “Thor,”) was nine years old when his family fled the Northern Irish city of Belfast in the late 1960s to escape a conflict that was then just beginning. More than fifty years later, he has journeyed back to that time and place, and found more fond memories than difficult ones on its cobbled streets.

It’s hard not to expect, from a title like “Belfast,” a much darker film than Branagh has crafted. That is how inextricable ‘The Troubles’ have become from the Northern Irish capital, the decades-long ethno-nationalist near-civil war that tore the country apart, and stained it in blood.

Branagh’s film never attempts to wash those stains away, nor does it try to explain them. Rather, it acts a reminder of the love that was there, too, and of the hope that kept people putting in new windows each morning after they had been broken the night before.

The film stars Jude Hill as Buddy — a surrogate for Branagh in this deeply personal near-memoir of a film — a young boy who doesn’t want to leave the city though his parents know they must. Even as the movie is punctuated with exploding cars and broken windows, the most-lasting images that the screen offers are of Hill’s face, often ebullient, laughing at a knowing joke or bit of wisdom from his loving grandparents, played by Judi Dench and Ciar?n Hinds; excited and nervous to be talking to his first crush, hoping he can impress her; deeply contented and occasionally in awe as he stares up at the movie screen with his family beside him.

While the film’s Van Morrison soundtrack does some of the work of bringing us into Buddy’s happy-go-lucky demeanor, it’s the black-and-white cinematography by Branagh’s long-time collaborator Haris Zambarloukos that captures his spirit, often transcendently. In every gorgeous frame, you feel that this is Branagh’s soul being shared up there too, more starkly than ever before.

It’s surprising that, after the work he has turned in both in front of and behind the camera, five-time nominee Branagh has never won an Academy Award. If “Belfast” is the one that finally wins him one, just as it got him his first Golden Globe (Best Screenplay) this month, it will be richly deserved.