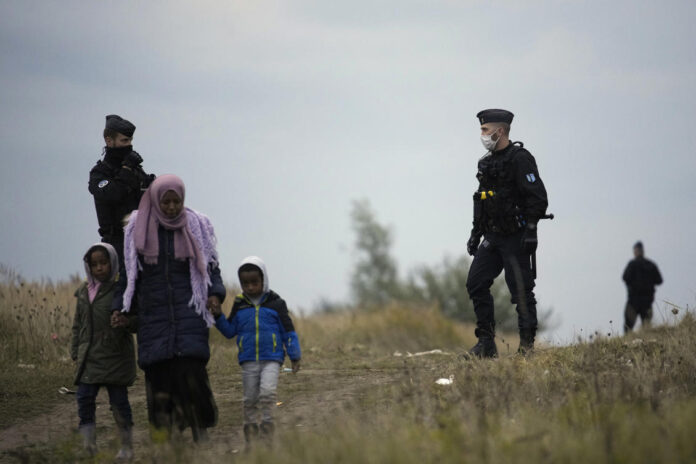 PARIS: At least 1,500 migrants are living in tents on a muddy lot in northern France as growing numbers of people fleeing Iraq, Afghanistan and other countries seek to traverse the English Channel and reach the UK, according to aid workers.
In Grande-Synthe, a town east of the port city of Calais, the migrants — including some families with young children — have converged on the site of a former industrial complex. Local authorities have warned of dire sanitary conditions and overcrowding in the area, risks associated with the fast approaching winter and deepening tensions between migrants and traffickers that often turn violent.
France’s interior minister and Britain’s home secretary were scheduled to speak Monday about the situation.
With its ports and tunnel to cross the English Channel, northern France has always been a magnet for people seeking to cross to Britain, fueled by traffickers’ promises of a better life there. The crossings are a source of friction between the UK and France, with British officials saying France should to more to stop boats leaving. France, meanwhile, says Britain should do more to help French authorities manage the migrants and stop traffickers.
The families and young men, meanwhile, keep coming. Those clustered in Grande Synthe are primarily Iraqi Kurds propelled via trafficking networks, according to Yann Manzi, founder of aid group Utopia 56. Most are trying to cross in small inflatable boats, because police have made it harder to sneak onto trucks and ferries.
They are “packed in” at the camp in Grande Synthe, and “more and more desperate” as the weather worsens, making boat crossings riskier, he said.
More than 23,000 people have reached the UK in small boats across the English Channel this year, including 1,185 on Thursday, a record for a single day. In addition, thousands more were rescued at sea by French maritime authorities.
“We have a problem which is that they are coming from France and in the end, if the French authorities will not or cannot control those departures it is very difficult for us to turn them back at sea,” Prime Minister Boris Johnson said Friday.
France’s Interior Minister Gerald Darmanin rebuffed Johnson’s criticism on Monday, telling BFM-TV that “we don’t need lectures from our British friends who are our allies, but I would like to remind them that we are neither their collaborators nor their auxiliaries.”
Local authorities in northern France have been warning for months that migrants keep coming to Calais and to the forest in Grande-Synthe, east of Dunkirk.
Many of the migrants in the port area want to cross the channel to seek refugee status, look for economic opportunity or because of family and community ties. French authorities say another big draw is lax British rules toward migrants without residency papers.
“It’s the state’s responsibility,” said the mayor of the town of Grande-Synthe, Martial Beyaert, of the dire conditions in which the migrants have lived for weeks. He told BFM-TV that he repeatedly ask the government to help and set up reception clusters along the coast and cap the number of inhabitants in each shelter at 100 or 150.
“With that and with the help of humanitarian associations, we could somewhat improve conditions,” Beyaert said.