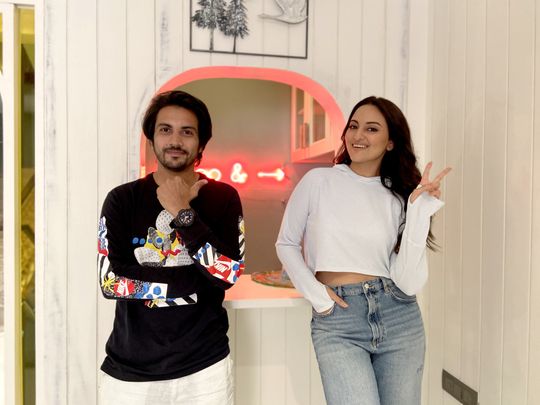 Bollywood actress Sonakshi Sinha, who is a proud homebody, embarked on a mission recently to spruce up her duplex in Mumbai’s posh Juhu neighbourhood with the help of celebrity interior designer and film production designer Rupin Suchak.

Suchak, who is currently working on Ranbir Kapoor’s home and Neetu Kapoor’s study in Mumbai, was happy to transform Sinha’s apartment into an inviting, boho den.

The ‘Dabangg’ actress lives in a tower called Ramayan owned by her actor-politician father Shatrugnan Sinha. The entire family lives in the tower and Sinha was keen to make her pad more vibrant and chic.

Suchak gives us an exclusive tour of Sinha’s refurbished place that he completed within a month. Here are our key takeaways from our chat with Suchak, who had recently worked on Alia Bhatt’s office in Mumbai and in movies including Kareena Kapoor’s ‘Ki & Ka’ film sets.

“Keep it cosy and artistic … She lives in a duplex in her father’s building called ‘Ramayan’ in Juhu. Even though her apartment is on the 10th floor, the height was designed ergonomically in such a way that that made you feel like you were on a higher floor. That elevated her space to a whole new level … Plus, she’s young and vibrant and her home now reflects her personality,” said Suchak. 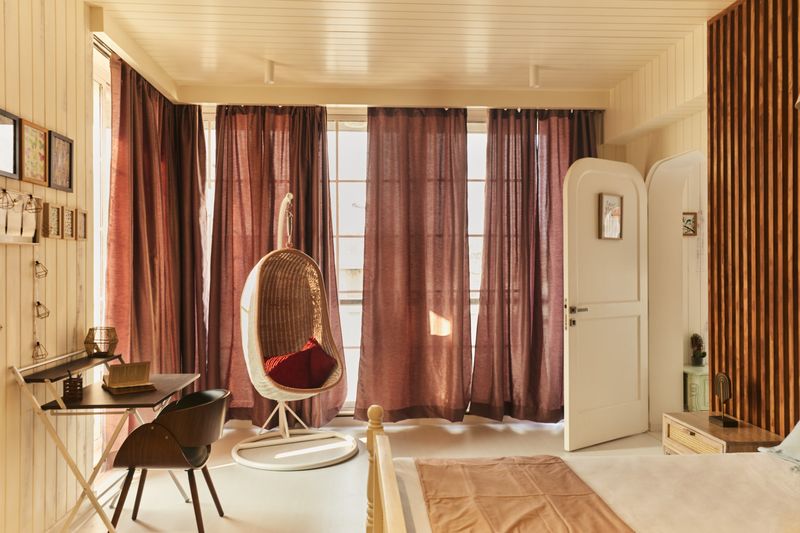 2. The two met once and hit if off instantly. While he mentally jotted down ‘cosy’, he was keen to introduce new textures and distressed, light wood into her home.

“I showed her reference spaces of tastefully done up rustic barns. We used a lot of distressed wooden panels in the living room and in her bedroom. The idea was that her den shouldn’t look too perfect and shiny. These Bollywood stars travel around the world and stay in the shiniest, chrome and glass hotels. So, they are done with gloss and shine finish. When they reach home, they want it to be inviting. And remember, their personalities are very intimidating, so it was important that their homes reflect a laid-back, boho vibe.” 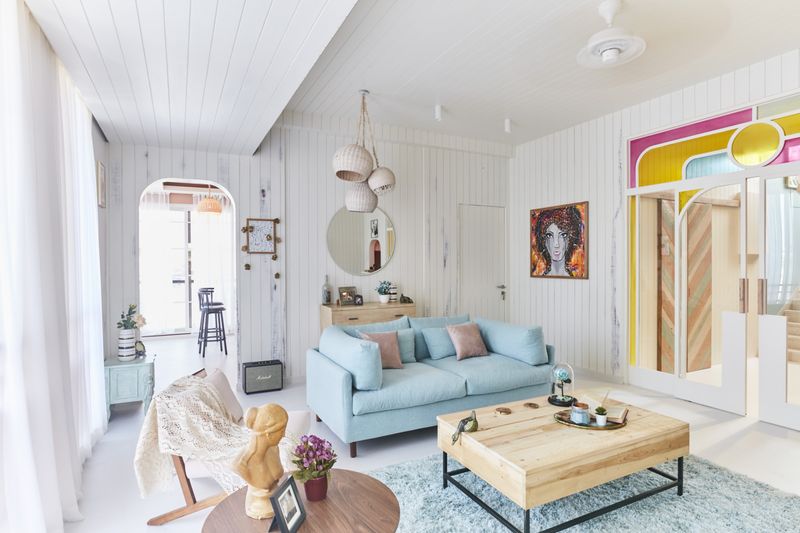 3. Sonakshi Sinha loves her art (she recently auctioned her paintings to raise funds for film workers during COVID-19) and her paintings naturally found a place in her wall. “The large art deco piece at the entrance is her own work and adds a fun, personal touch to the interiors. Her colourful art deco added a zing and zaniness to the wall.”

4. For her bedroom, there was a lot of discussion about what kind of bed to go for. While Sinha wanted a four-poster canopy bed, Suchak convinced her that a white bamboo bed is a better fit for the space. A four-poster bed could have dwarfed the room, he feared. Suchak also used a lot of American pine wood in the house.

“The bamboo bed mellows down the atmosphere considerably and doesn’t make it look heavy or stuffy … I also did a lot of layering and water treatment of walls in pastel blues and yellow.”

5. They also worked hard on sourcing a walk-in wardrobe and a make-up station done in mint green wood. Internally, he also broke down a storage room near the foyer and converted that into a coffee/bar corner.

“The lit neon signage ‘To Infinity & Beyond’ adds a kooky touch. I broke down the wall and added a window to break up that space,” said Suchak.

6. Their favourite addition is also the glass partition with tinted windows.

“We used a lot of white and blue and there was a fear of it becoming linear and boring. So the glass partition and the zany bar was meant to cut the all-white with blue feel,” said Suchak. 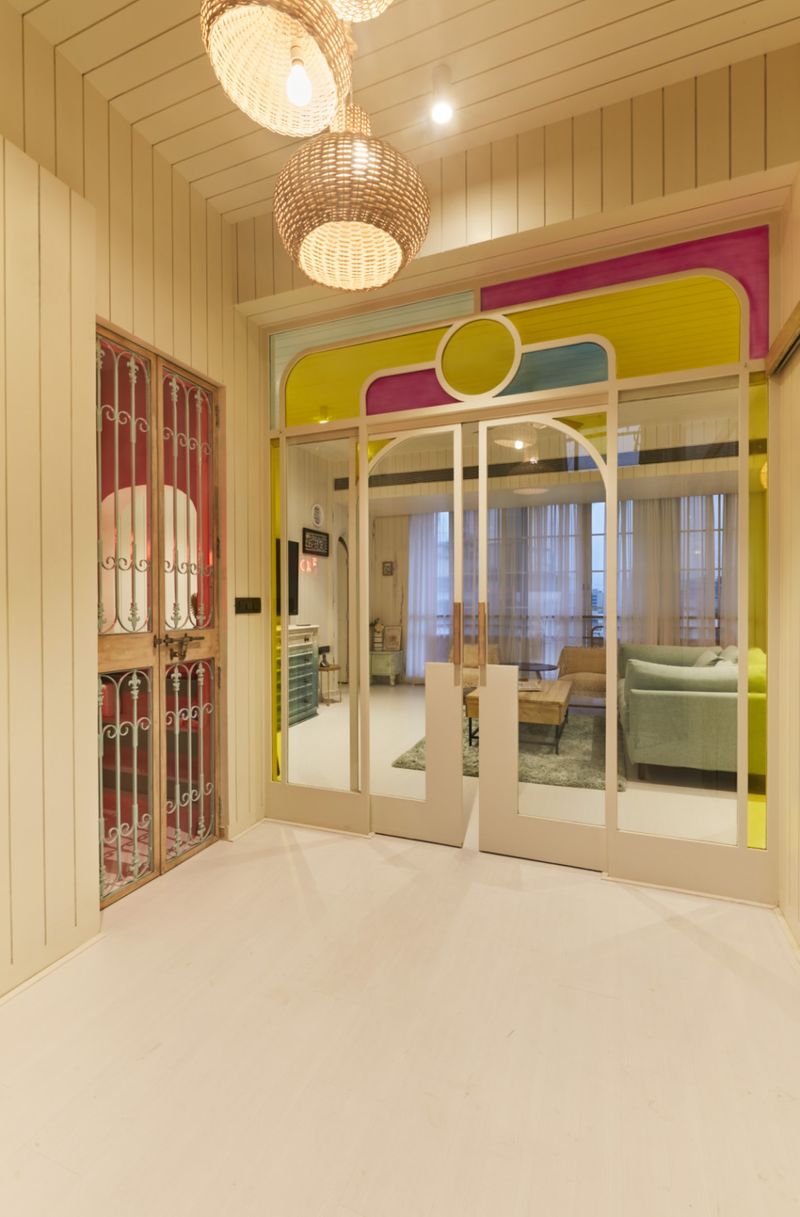 “Usually you see those functional grills in middle-class homes. But I coloured it differently and designed it in such a way that it instantly attracts your attention … The whole pad has such a welcoming feel to it. All you want to do is plop down on the light blue sofa and drink in the muted palettes.”

8. Before the place was spruced up and given a makeover, her house had heavy, ornate pieces and wood.

“It looked slightly outdated and heavy … So the idea was give it a turnaround by inserting earthy tones, milky palettes, geometric shapes and soft linens,” said Suchak.

9. Every piece that you find in Sinha’s home has been sourced from India.

“The bust that you see on the coffee table was sourced from Ahmedabad. I believe that you don’t have to travel far from India when decorating your home. Everything is available right here … I take pride in sourcing stuff from India, unless my client demands a particular leather from Italy … Even at that time, I give them Indian-equivalent,” said Suchak. 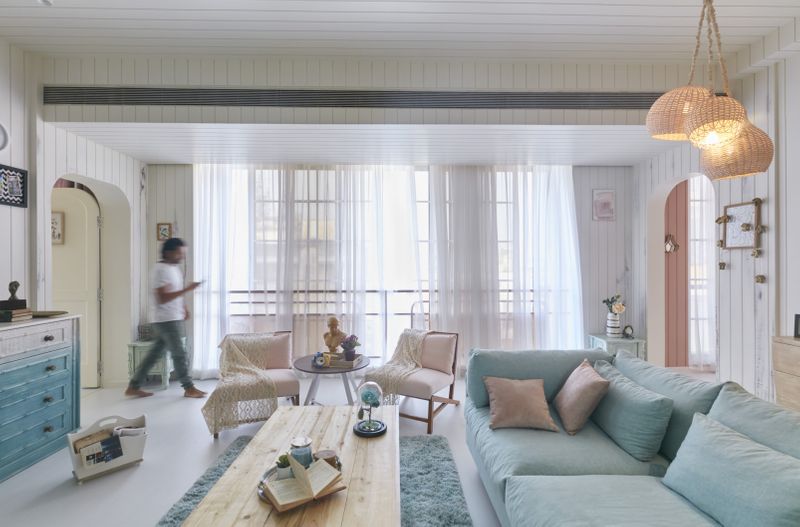 10. Sonakshi Sinha was heavily invested in the process. This project was a different experience when compared to doing up Alia Bhatt’s office space in Mumbai.

“Every piece of furniture and corner has been personally approved by her and then incorporated. Its always a dream to have an artistic client like her.”

11. Their favourite corners in Sinha’s swanky den includes the spot wall of her bedroom and the neon highlights in the coffee/bar space.

Previous articleBollywood singer Armaan Malik on the importance of reinvention
Next articleFrom Disha Patani to Tara Sutaria, these Bollywood stars took a short break in the Maldives