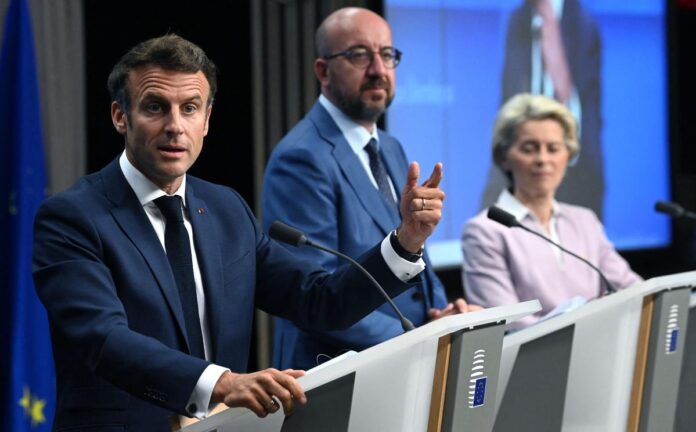 BRUSSELS: European Union leaders on Thursday agreed to grant candidate status to Ukraine and Moldova, in a show of support in the face of Russia’s war.
“A historic moment. Today marks a crucial step on your path toward the EU,” Michel wrote on Twitter during a summit in Brussels.
“Our future is together.”
Ukraine applied to become an EU candidate in a bid to cement its place in Europe just days after Moscow launched its devastating invasion.
France’s President Emmanuel Macron said the move sent a “very strong signal” to the Kremlin that the EU backs the pro-Western aspirations of Ukraine.
“We owe it to the Ukrainian people who are fighting to defend our values, their sovereignty, their territorial integrity,” he said.
Ukraine’s President Volodymyr Zelensky on Twitter hailed the EU’s decision “a unique and historic moment in Ukraine-EU relations,” adding that “Ukraine’s future is within the EU.”
The decision sets the two ex-Soviet nations at the start of a years-long path toward joining the bloc requiring major reforms and protracted negotiations.
The EU has laid out a series of steps for Kyiv to take, including on bolstering the rule-of-law and fighting corruption, before it can progress to the next stage entailing accession talks.
Moldova and Georgia, two countries that also have part of their territory occupied by the Kremlin’s forces, handed in applications in Ukraine’s slipstream.
EU leaders agreed to offer Georgia a “European perspective” but said it must carry out a raft of steps before it can become a candidate.
Georgia reacted by saying it was determined to take steps required to qualify.
“We are ready to work with determination over the next months to reach the candidate status,” President Salome Zurabishvili said on Twitter.