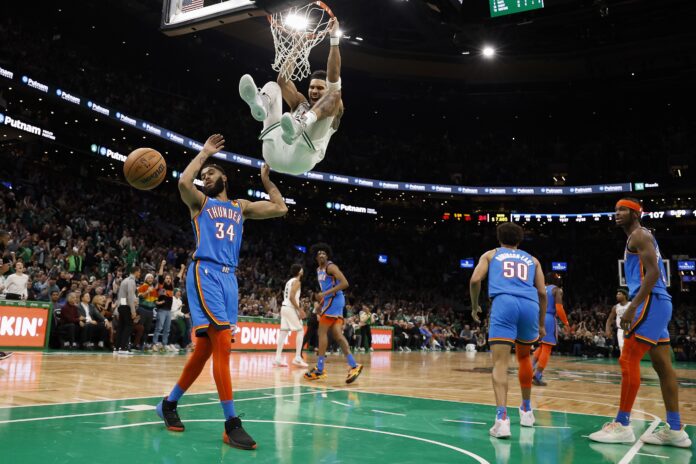 Marcus Smart added 22 points, Al Horford had 12 points and 11 rebounds and Tatum also contributed 10 rebounds as the Celtics improved to 11-3 on the season while the Thunder fell to 6-8.

The Celtics, down by seven at halftime and after three quarters, outscored Oklahoma City 37-26 in the fourth quarter to rally for the victory, with Derrick White coming off the bench to score 16 points.

“I thought our bench did a great job of bringing the energy and picking us up,” Celtics coach Joe Mazzulla said.

“We were a little sluggish starting this game,” he said. “I think the second half we just wanted to come out, pressure the ball, make them uncomfortable and that led to points on the other end.

“Stay being resilient. That’s what it is. Got to be resilient always.”

Boston moved atop the Eastern Conference after the Milwaukee Bucks fell to 10-3 with a 121-106 home loss to Atlanta.

De’Andre Hunter led the Hawks with 24 points while Trae Young added 21 points and nine assists for Atlanta, which improved to 9-5. Dejounte Murray and Clint Capela each added 19 points and Capela had 10 rebounds for the Hawks.

Bam Adebayo scored 30 points to lead seven Miami scorers in double figures as the Heat edged visiting Phoenix 113-112. Adebayo, who grabbed 10 rebounds, was 9-of-18 from the floor and 12-of-14 from the free throw line.

Adebayo’s jumper with 58 seconds remaining gave Miami a 111-110 edge but Cameron Payne answered to give Phoenix a 112-111 lead.

Adebayo was fouled by Deandre Ayton and hit two free throws with 35 seconds remaining to give the Heat their final victory margin.

Payne missed a late jumper and Devin Booker, who led Phoenix with 25 points, missed a 3-pointer in the last two seconds to end the Suns’ final hope.

Canadian guard Dalano Banton scored 27 points to lead the Toronto Raptors to a 115-111 triumph at Detroit.

Paul George had 22 points and a game-high eight rebounds to lead the Los Angeles Clippers to a 122-106 victory at Houston.