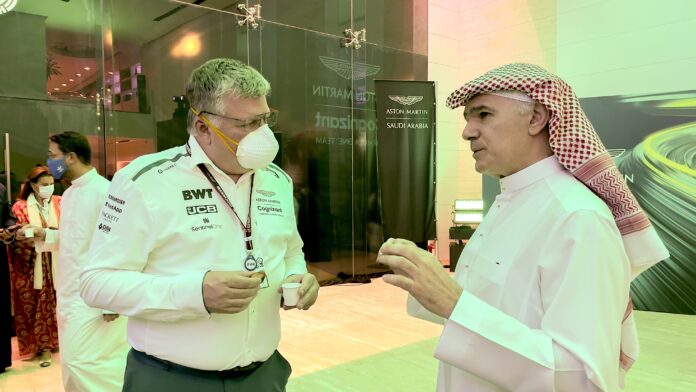 “It’s a momentous event for the country,” said Husein Alireza, the Saudi professional rower. “Everyone’s flown in, there’s a real buzz in the air, you know? We haven’t had this buzz in a very long time.

“I think we’re used to hosting people from all over the world — Jeddah has been the social capital for a long time, it’s a tourist hotspot. We’ve got the Red Sea, and the people of Jeddah are very laid back and welcoming.”

“I think for any tourist, a way to experience a new location for the first time — to do it through the world of sports is a great way,” said Dania Akeel, professional Saudi race driver. “You get action, you get the social aspect, you get entertainment and you get to witness excellence at the highest level.”

At the launch of the Aston Martin Vantage F1 edition in Jeddah, Arab News had the opportunity to talk with some Saudi pro athletes, along with Otmar Szafnauer, Aston Martin F1 team principal, about some of their predictions before the long-awaited Jeddah race.

“I think we will do a really good job in Jeddah, the track looks amazingly fast and like nothing else on the calendar, so it should be good fun,” Szafnauer said. “Lance (Stroll) progresses year-on-year. He’s in the steep part of the learning curve, and he had a great race in Doha.”

Szafnauer, a Romanian-American engineer, was received at the launch of the Aston Martin car by Ali Alireza who gifted Szafnauer a special sword, which the team principal thanked him for and jokingly said: “This will come in handy for future negotiations with drivers.”

“Sebastian (Vettel) has brought a lot of winning experience to the team and know-how of what it takes to win — not just races, but also world championships, and he’s lifted our game quite a bit, but because of the rule change, we really did take a step backwards.”

Due to COVID-19, F1 race cars from 2020 were carried over to this season with very little technical adjustments. There were, however, aerodynamic rule changes set by the FIA that stripped performance away from Aston Martin’s low-rake car, hindering their performance this year.

“It was too late, and that’s not a driver thing, that’s more of a car development issue,” Szafnauer said. “Once those rule changes were upon us, we couldn’t really do anything.”

As a result, Aston Martin have had to use some of their resources for 2022 on this year’s car to try and remedy what’s left of the season, to no avail.

“But next year is a whole new year, all the rules (will) even the playing field for everybody,” he added.

Akeel said many factors currently in play will determine the champion of this season, saying that no matter what changes have been done to the engine to make it perform better, the human element in the driver is always a key factor.

“You know, the truth is, I don’t favor any driver, but I favor incredible driving skills. Each driver delivers a certain finesse, technique, a certain decision-making process that you can’t compare to each other,” she said.

“One driver will blow you away in the rain, another driver will come from the back of the grid all the way to the front, another driver will show you their resilience in defending their position. Each driver behaves differently on corners, on overtakes, on straights. And of course, that’s not to say, the team as well has such a massive influence.”

Dania Akeel made history when she became the first Arab female to win the T3 title at the FIA World Cup for Cross Country Bajas event this year. She completed a remarkable comeback from a serious injury suffered earlier this year.

Akeel told Arab News that despite sustaining three pelvic fractures while participating in the Bahrain Rally Season, she was still planning to compete in the 2022 Dakar Rally which will take place in Saudi Arabia next January.

Alireza, who took part in the men’s rowing in 2020 Tokyo Olympics, competed with a damaged lung. Mid-competition, a new ad hoc strategy was devised by his team that had allowed him to manage injury-hit races, with the 28-year-old unable to perform at full capacity.

On F1, Alireza had his own take on who the crown of this season will go to.

“I always go for the underdog and you know, seven years of Hamilton — I love the guy, I supported him at the start, but I would love to see Verstappen win the race. He’s such an exciting, dynamic driver, I love the way he drives, extremely aggressive. And it would be nice to see him win it here in Jeddah, that would be cool.

“We’ll see what happens but I think I’m on Team Verstappen on this one,” he concluded.