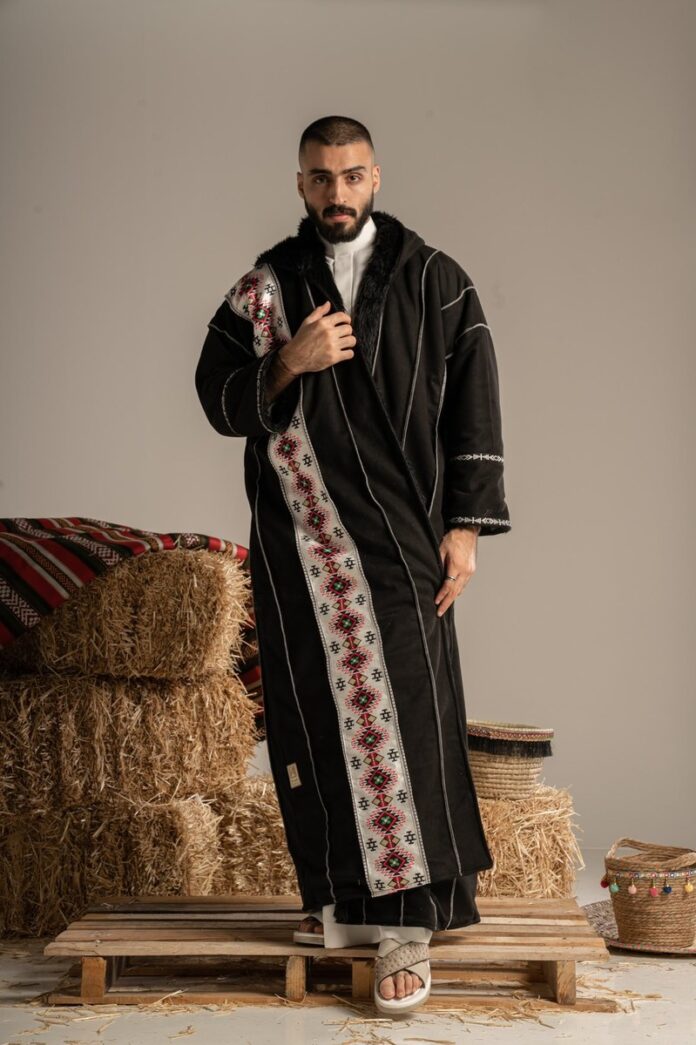 RIYADH: Winter has well and truly arrived and so the people of Saudi Arabia are adding a layer or two to their outfits to help them cope the colder temperatures.

A particularly popular item found in Saudi winter wardrobes is a traditional Bedouin overcoat known as the farwa, versions of which have for hundreds of years been keeping people in the region warm during long, harsh winter nights in the cold, unforgiving desert.

The long, oversize coat, made from thick, cozy material, is especially common in northern and central parts of the Arabian Peninsula, where temperatures can drop surprisingly low. Its lining is usually made of sheepskin or fur and its cut is similar to that of the traditional Arab cloak known as a bisht.

This new, trendy age of the farwa began with homegrown boutiques and businesses that flourished by putting a modern, stylish spin on a traditional Arab garment. (Hedra)

In the old days the farwa was a garment for men, worn by tribesmen and royalty alike, but the styles, cuts and fur linings varied depending on social class and status.

Nowadays, it is worn by both men and women and is considered by many an essential part of their wardrobes. In the modern era it is also become a fashion item among some Saudis as part of a creative winter ensemble. As a result, the farwa can now be found in myriad modern designs and bright colors, sometimes adorned with cultural patterns and embroidery.

This new, trendy age of the farwa began with homegrown boutiques and businesses that flourished by putting a modern, stylish spin on a traditional Arab garment.

“The farwa is our way of preserving our cultural identity, while offering people something new and exciting, something they can play around with by mixing and matching different clothing items and accessories,” said Manal Al-Harbi, a Saudi entrepreneur and owner of Gabba, a boutique in Riyadh.

She said the farwas sold in her store are all handmade and that most of those on the market these days are made of synthetic materials. The average price is about $370 she added, but some can sell for as much as $2,600.

Gabba, a boutique in Riyadh, sells handmade farwas at its boutique. (Gabba)

“It depends on the materials you use,” said Al-Harbi. “Real fur sourced from animals will be much more expensive, as the process from raw material to final product is lengthy, labor-intensive and very costly.”

Real fur must first undergo extensive treatment to remove the animal’s scent, she explained, then it is dyed and processed further to obtain the soft, inviting texture customers enjoy.

Individual designers and fashion houses put their own spins on the farwa. Al-Harbi, for example, focuses on farwas for women with minimalist designs that can suit any occasion, though she is also happy to accept custom orders.

“Previously women in Saudi would wear jackets over their abayas but nowadays the farwa is the abaya because it looks like it and also serves two purposes: keeping them warm while looking more stylish,” she said.

The trend toward more stylish farwas began about 10 or 12 years ago and picked up pace in the past few years, according to Al-Harbi. Almost every household in the Kingdom’s central and northern cities will own a few to wear during the cold season, she said.

Jeddah-born Hussain Abedi, 25, told Arab News that he thought he was done with chilly weather when he returned to Saudi Arabia after living in the UK. But after moving to Riyadh and experiencing its cold winters, he realized he had some shopping to do.

“I go farwa hunting with my friends, sometimes,” he said. “It’s just something I enjoy wearing and buying different designs of. It can be difficult to settle on a color or specific design pattern but, overall, wearing a farwa feels like a warm embrace.”

They also make good gifts, Abedi added, and can make a fashion statement among friends, especially when the farwa is made with real fur.